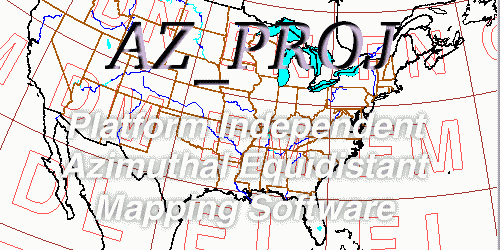 About AZ_PROJ Presentations by NA3T Sites using AZ_PROJ for fun Thoughts on restructuring and where ham radio could be going. What we can learn from analysing contest logs. Some historical perspectives on ham radio, including US licensing conditions. These links are dead. I'm looking for the original text.

Making a map here on the Server.

Color Problems If the nighttime part of the globe animations are gray, rather than lightblue, (or you have blank spaces in this sentence) then here's an explanation.

Roger Hedin SM3GSJ has a Microsoft windows based azimuthal equidistant mapping program for hams which uses the same wdb database for the geographical information as this server.

The GARP Server is another az-equidistant map server. It has altitude (and ocean depth) information.

About the Azimuthal Equidistant Map Server